Good morning, and welcome to the U-T Arts & Culture Newsletter.

I’m David L. Coddon, and here’s your guide to all things essential in San Diego’s arts and culture this week.

Two timeless songs performed by Chester Gregory during his “Higher & Higher: A Rock ‘n’ Soul Shindig” concert stirred me to the core, because when the virtual show was over, I turned to Alexa and asked her to play “A Change is Gonna Come” by Sam Cooke, and after that “What’s Going On” by Marvin Gaye. I just had to hear them again, in their original incarnations.

Not that Gregory, a Broadway performer with “Hairspray” and “Sister Act” and “Motown: The Musical” on his resume, didn’t give them his all. He stars in this 90-minute show presented by the Chicago-based Artists Lounge Live. It’s being offered and presented here through April 18 by the San Diego Repertory Theatre.

Backed by a tight, relatively unobtrusive band and two side vocalists, the personable and sincere Gregory performs a variety of what have become standards from the soul, R&B and rock idioms. He leans heavily on Otis Redding, and who can blame him for that? But also on Jackie Wilson, whom he first portrayed in “The Jackie Wilson Story” musical more than 20 years ago. It was Gregory’s breakthrough in the biz.

Preceding his cover of Michael Jackson’s “Rock With You,” Gregory recounts a long story about performing for the superstar, like himself a native of Gary, Ind. Throughout the show, in fact, Gregory’s asides to the unseen virtual audience are warm and well-intended. You can feel that he misses live crowds.

I missed one while watching, too. “Higher & Higher” is a show that cries out for audience response, and lots of it. When Gregory speaks into the stage mic between songs, his voice echoes inside the empty venue. I wonder if I can ask Alexa to play some crowd noise.

“Higher & Higher” tickets, at $40, are priced high. You will get an hour and a half of music and memories, though.

For less than half the cost of a “Higher & Higher” ticket, I streamed A.J. Croce’s recent career retrospective show from City Winery in Nashville. This concert was preceded a week earlier by a streaming gig celebrating the release of his new “By Request” album of cover tunes.

The retrospective event, which found Croce at his piano and accompanied by a jaunty three-person band, included a mixture of some of those “By Request” covers like Billy Preston’s “Nothing From Nothing” and Allen Toussaint’s “Brickyard Blues,” and compositions of his own like “The Call of Love” and “Easy Money”. (See Union-Tribune pop music critic George Varga’s recent interview with Croce here.)

While streaming I noted with fondness that the mustachioed Croce is looking more and more like his dad, whom we lost back in 1973. But the Nashville show demonstrated yet again that son A.J., now 49, is doing father Jim proud.

You can next check out A.J. Croce on “NPR’s Mountain Stage Celebrates Huntington’s 150th” on April 16.

Exploring, in the words of Bach Collegium San Diego Artistic Director Ruben Valenzuela, “the nexus between Baroque music and jazz,” a concert which first streamed on March 13 attempts to do just that.

The star is countertenor Reginald “Rex” Mobley. Recorded on the Lamb’s Players Theatre stage in Coronado, Mobley and an ensemble of skilled musicians perform a 50-minute program titled “Bach to Bop.” The repertoire reflects this dichotomy, although chronologically speaking, jazz ballads such as Cole Porter’s “Every Time We Say Goodbye” and “So In Love” are sprinkled in among the works by J.S. Bach, Henry Purcell and Benedetto Ferrari rather than all coming at the end of the set.

Mobley, who has a beautiful voice, is comfortable with both genres, though most everything we hear is very measured. The performance of “So In Love” must have been regarded as an exception, because one of the viewers in the live chat likened it to music “from a Bond film.”

An intermission features a discussion between Valenzuela and Mobley. It’s suggested that what Baroque music and jazz have in common is “an improvisational free spirit.” Glad you told me.

Today we celebrate one of the rites of spring: Opening Day in Major League Baseball. With high hopes, the Padres launch their 2021 at Petco Park against the Arizona Diamondbacks. Embracing baseball again brings to mind all the cracking good films that have been made directly or indirectly about our national pastime. If, like me, you’re in the mood to watch one, I’ve got my favorites to recommend.

Let me start by saying that two of the most popular among baseball flicks, “The Natural” and the first “Major League” film, are overpraised and overrated respectively.

Of course, like everybody, I still have a soft spot for the shamelessly sentimental but irresistible “Field of Dreams” from 1989.

You can rent all of these films via Amazon Prime. Play ball.

The Old Globe on Wednesday announced a new two-year residency program for BIPOC (Black, Indigenous and people of color) artists, with the appointment of four San Diego-based theater industry veterans who have all worked at the Globe in the past.

Over the next two years, all four will be involved in the process of how plays are selected for production, take part in artistic staff meetings, read and consult on plays under consideration and introduce new playwrights, directors and designers to the Globe, among other duties.

Read more in this report by the Union-Tribune’s Pam Kragen.

In his first solo art show, Jin Yung Kim is showing people who he is — and how our dreams and fantasies can influence who we become. For Kim, there’s a multitude of influences — from animation to games to toys to books — that helped direct him toward the path of pursuing art, even if he didn’t think he had the biggest dreams when he was younger.

“I didn’t dream big when I was young. Most kids aspired to be a vet, doctor, fire fighter and whatnot,” he says. “That definitely wasn’t me. No huge aspirations to change the world or become famous. None of that really crossed my mind growing up. I was more worried about playing with my friends or beating the next boss in a Final Fantasy (video) game.

“As I got older, I realized that art was a viable option as a career for me,” he continues. “I started to picture myself working on cool animated movies, shows and comic books. That was the dream that pushed me to take the leap and attend an art school here in San Diego.”

Read more about him in this story by the Union-Tribune’s Lisa Deaderick.

“Diana,” the La Jolla Playhouse-born musical whose Broadway opening was canceled by the pandemic last spring, will stream on Netflix Oct. 1, two months before it returns to live performances at the Longacre Theatre in Manhattan this fall.

“The chance to share our show, first with Netflix’s global audience, and then welcoming a live audience back on Broadway, is something we’ve all been dreaming about for more than a year,” the Broadway producers of “Diana” said in a statement on Tuesday. “We could not be more thrilled to finally share both the film and the Broadway musical with the world.”

The Princess Diana-themed musical had its world premiere at the Playhouse in 2019 and was just 19 days from its Broadway premiere when it closed in March 2020. If health codes permit, it is slated to resume live performances on Dec. 1.

Read more in this story by the U-T’s Kragen.

If you’re starving for art and more, the Hillcrest Business Association today kicks off the first Walk in A.R.T (Allyship, Resilience and Truth), which will feature art, music, food and more. Scheduled to be held the first Thursday of every month, today’s inaugural event kicks off at 5 p.m. and continues until 11 p.m. Find it, along with local retailers and restaurants, in the Mural Alley in the 500 block of University Avenue just south of the Hillcrest sign.

University of California Television (UCTV) is making a host of videos available on its website during this period of social distancing. Among them, with descriptions courtesy of UCTV (text written by UCTV staff):

“How COVID-19 is Reshaping Cinema”: Since its inception, cinema has been a collective experience, the modern equivalent of gathering around the campfire for storytelling. It continues to shape our perceptions, our attitudes and the larger culture by providing a sort of shared mythology. However, the COVID-19 pandemic has altered the ways films are delivered to the audience, just as the 1918 influenza epidemic affected the nascent film industry of that era. The study of past pandemics sheds light on how the current situation is reshaping the world of cinema and whether those changes are likely to become permanent. The long-term future is as yet undetermined, but historical antecedents may help us to discern its outlines.

“The Antibiotic Resistance Crisis”: Scientists are concerned that as COVID-19 variants develop, one will appear that is resistant to conventional drug therapies. The rise in antibiotic resistance poses a formidable challenge to public health. Root causes include overzealous use of antibiotics, lack of new antibiotic development by pharmaceutical companies, and the evolution of microbes. As medical science confronts this crisis, ethical dilemmas must be acknowledged. These include balancing restrictions on individual liberty for the protection of public health, and also the just usages of this precious resource in differing economic and epidemiological situations. Dr. Victor Nizet describes the current challenges and potential paths forward.

“Exploring the Human-Ape Paradox: Symbolic Play”: Symbolic (or imaginative) play is a human universal, one essential to cognitive and social development. A child’s capacity to utilize objects, actions or ideas imaginatively supports creativity and emotional regulation, and may also impact language development. An evolutionary perspective argues that play is critical to the “rehearsal” of adult behavior and behavioral flexibility not just in humans but also our nearest living relatives, the great apes. This presentation by Linda Merchant explores whether great apes display a capacity for symbolic play. Evidence of this capacity cited in her presentation ranges from extended anecdotes to empirical reports from field studies.

And finally: Arts in the Time of COVID

In this week’s edition of Arts in the Time of COVID, Pacific editor Nina Garin talks about child author Jude Evans’ book, “Bands by Jude,” the La Jolla Playhouse-bred musical “Diana” and a new Switchfoot concert. Watch it here. 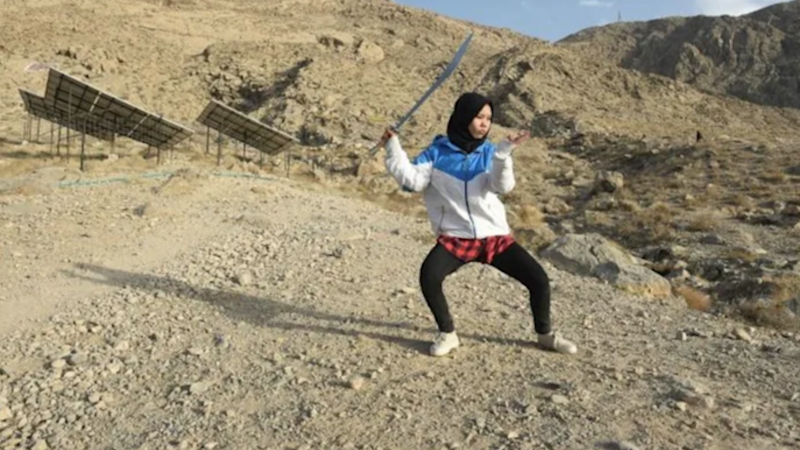